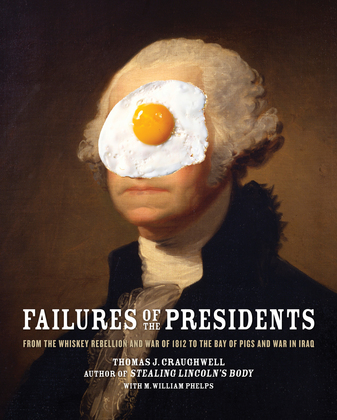 Failures of the Presidents

by Thomas J. Craughwell (Author), M. William Phelps (Author)
Buy for $19.95 Excerpt
Nonfiction History History by country United States
warning_amber
One or more licenses for this book have been acquired by your organisation details

What were they thinking?

• In an effort to put an end to Britain and France’s policy of seizing American ships and sailors, Thomas Jefferson calls for an embargo.

The Result: 30,000 sailors put out of work; mercantile families bankrupted overnight; a nationwide economic depression; and the New England states, which depended heavily on international commerce, threaten to secede from the Union.

• To promote the doctrine of popular sovereignty, Franklin Pierce approves the repeal of the Missouri Compromise and permits residents of Kansas and Nebraska to decide whether their territories will admit slavery.

The Result: Dozens of settlers murdered; Lawrence, Kansas, burned and looted; John Brown elevated to the status of national hero among abolitionists; the country moves closer to civil war.

• Convinced the 20,000 men, women, and children of the Bonus Army were Communists and criminals, Herbert Hoover sends 600 crack troops, a detachment of cavalry, and five tanks to drive the protesters out of Washington.

The Result: 4 dead, including two infants; more than 1,000 injured; the Communist Party in America enjoys a public relations field day; Hoover is driven into political exile.

• In an effort to install a capitalist government in the Middle East, stabilize the region, and protect America from a possible Iraqi terrorist assault using weapons of mass destruction, George W. Bush orders the invasion of Iraq.

The Result: More than 4,000 American soldiers and personnel dead; estimated hundreds of thousands of Iraqi civilians dead; hundreds of billions of dollars spent; the torture of prisoners in the Abu Ghraib prison and the failure to find weapons of mass destruction leave American global credibility in tatters.