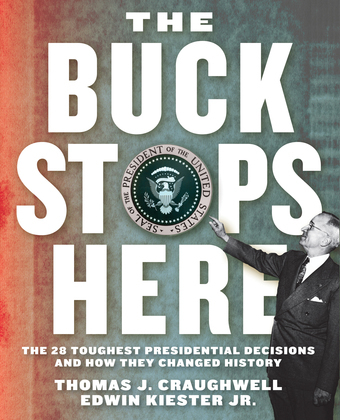 The Buck Stops Here: The 28 Toughest Presidential Decisions and How They Changed History

by Thomas J. Craughwell (Author), Edwin Kiester Jr (Author)
Buy for $19.99 Excerpt
Nonfiction History History by country United States
warning_amber
One or more licenses for this book have been acquired by your organisation details

The Buck Stops Here consists of twenty-eight engrossing accounts of the most important United States presidential decisions in history. They range from the abolition of slavery with the Emancipation Proclamation to the acquisition of vast new territory with the Louisiana Purchase to the establishment of enduring institutions such as Medicare and America’s national parks. These decisions encompass, too, such less-well-known measures as the G.I. Bill of Rights, which cleared the way for more than two million veterans to receive a college education, as well as acts that reverberated worldwide, including Theodore Roosevelt’s construction of the Panama Canal, Harry S Truman’s deployment of the atom bomb, Richard Nixon’s visit to China, and John F. Kennedy’s pledge to put a man on the moon.

Thomas J. Craughwell and Edwin Kiester Jr.’s fascinating survey of twenty-eight crucial presidential decisions opens a door into the White House’s corridors of power, giving readers an insider’s view of how and why these decisions were made, while providing a yardstick with which we might, perhaps, gauge the success of current and future presidents.

Each chapter places the reader squarely in the historical period while presenting the issues at stake, the interests at work, and the obstacles encountered. This book takes the reader into the minds of some of American history’s greatest leaders and analyzes the enduring, often far-reaching, sometimes unforeseen consequences of these presidential decisions—in their own time, and right up to the present day.

Some of these decisions were simply expedient; others required the courage of conviction in the face of intense opposition. Some were motivated by political loyalties, but many were evidently inspired by noble visions of a better nation, a fairer world. All were momentous, and helped define who we are and how we live now.