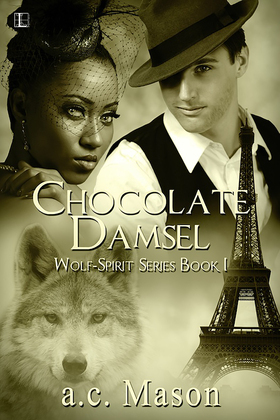 by A.C. Masons (Author)
Buy for $2.99 Excerpt
Fiction Romance Paranormal Contemporary
warning_amber
One or more licenses for this book have been acquired by your organisation details

Will her love break through his armor so he can be whole again?

In June of 1940, Nazis march into Paris, France. Brutality haunts the streets.

Engel VanWolf, the Alpha of a Shunu pack – immortals, who shift into wolf-spirit – has a painful past and the patch on his eyes serves as a reminder of human cruelty. No stranger to injustice, he poses as a Nazi officer to smuggle Jewish orphans from the city. Drawn to a seductive fragrance, chocolate skin, and velvet voice, VanWolf comes upon a human beauty, Alexia, in danger. A hunger long forgotten burns anew inside him.

Alexia Pane is taken in by the shunu pack, and finds communal living isn't the only thing they share. When danger comes knocking, she's sent to warn VanWolf, who has been discovered but needs rescuing of her own. As he whisks her to safety, he awakens her dormant passion. It's not the flames of the city she fears, but the fire he invokes inside her. The closer she gets, the more he pushes her away. And then, she falls into enemy hands.

Can VanWolf save the woman he loves from a ruthless enemy and mend the pain he has caused?