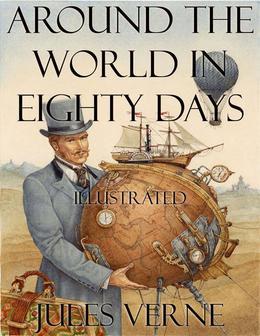 Around the World in Eighty Days : Illustrated

by Jules Verne (Author)
Buy for €1.49 Excerpt
Fiction Classics
warning_amber
One or more licenses for this book have been acquired by your organisation details

Around the World in Eighty Days: Illustrated with original illustrations by Alphonse-Marie de Neuville and Léon Benett, translated by George M. Towle, published in 1873.

Around the World in Eighty Days (French: Le tour du monde en quatre-vingts jours) is a classic adventure novel by the French writer Jules Verne, first published in 1873. In the story, Phileas Fogg of London and his newly employed French valet Passepartout attempt to circumnavigate the world in 80 days on a £20,000 wager (equal to £1,324,289 today) set by his friends at the Reform Club. It is one of Verne's most acclaimed works.

A wager by the eccentric and mysterious Englishman Phileas Fogg that he can circle the globe in just eighty days initiates this marvelous travelogue and exciting suspense story.