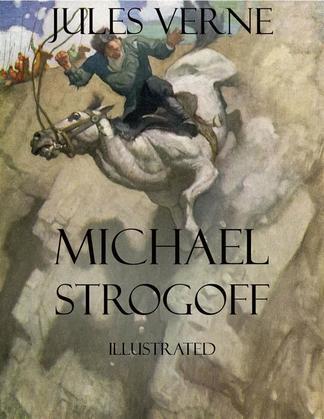 by Jules Verne (Author)
Buy for €1.49 Excerpt
Fiction Action & adventure Classics Historical Literary Mystery & detective Suspense War & military
warning_amber
One or more licenses for this book have been acquired by your organisation details

Michael Strogoff or The Courier of the Czar (French: Michel Strogoff) is a novel written by Jules Verne in 1876. This edition includes original illustrations by Jules-Descartes Férat.

Critics, including Leonard S. Davidow, writing from Reading, Pennsylvania, in his 1937 introduction to The Spencer Press reprint as a volume in its "Classic Romances of Literature" series consider it one of Verne's best books.

Davidow wrote, "Jules Verne has written no better book than this, in fact it is deservedly ranked as one of the most thrilling tales ever written." Unlike some of Verne's other famous novels, it is not science fiction, but a scientific phenomenon is a plot device. The book was later adapted to a play, by Verne himself and Adolphe D'Ennery. Incidental music to the play was written by Alexandre Artus in 1880. The book has been adapted several times for films, television and cartoon series.

Michael Strogoff, a 30-year-old native of Omsk, is a courier for Tsar Alexander II of Russia. The Tartar Khan (prince), Feofar Khan, incites a rebellion and separates the Russian Far East from the mainland, severing telegraph lines. Rebels encircle Irkutsk, where the local governor, a brother of the Tsar, is making a last stand. Strogoff is sent to Irkutsk to warn the governor about the traitor Ivan Ogareff, a former colonel, who was once demoted and exiled and now seeks revenge against the imperial family. He intends to destroy Irkutsk by setting fire to the huge oil storage tanks on the banks of the Angara River.