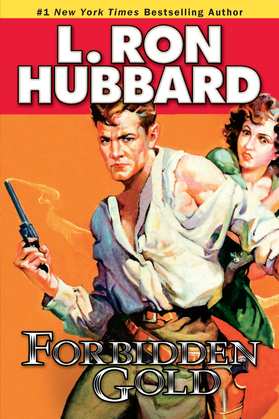 by L. Ron Hubbard (Author)
Buy for $4.99 Excerpt
Fiction Action & adventure Romance Historical
warning_amber
One or more licenses for this book have been acquired by your organisation details

The ancient jungles of the Yucatán hide a world of secrets… the secrets of wealth, love, and fate. Now daredevil pilot Kurt Reid is about to tempt fate and fly into the heart of that jungle in search of his destiny—an adventure as daring and dangerous as any undertaken by Indiana Jones.

He’s looking for gold, but not just any. He’s after one particular nugget—flying blind into a tropical haystack in search of a very valuable needle. Thanks to his grandfather’s vexing dying wish, his entire inheritance—as well as the shape of his future—hangs on the success of his journey.

As if that weren’t bad enough, Kurt soon finds that his family legacy runs deep and dark in the Yucatán. The Mayans mistake Kurt for his grandfather, and they’ve got fifty-years worth of revenge to serve up. Whether he lands on the sacrificial altar or in the arms of his sexy co-pilot Joy, things are bound to heat up fast in pursuit of Forbidden Gold.

In 1931, as a student at George Washington University, Hubbard founded the college Glider Club and within a few months a respected columnist said “he is recognized as one of the outstanding glider pilots in the country.” Later he wrote as the aviation correspondent for the prestigious flying magazine Sportsman Pilot. His combined writing and flying expertise comprised the perfect recipe to give stories like Forbidden Gold their authentic flavor.