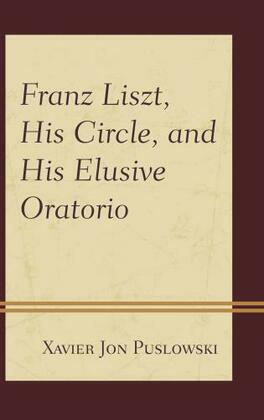 Franz Liszt, His Circle, and His Elusive Oratorio

Many scholars, concert pianists, and classical music fans deem Franz Liszt the preeminent pianist of the nineteenth century. In Franz Liszt, His Circle, and His Elusive Oratorio, Xavier Puslowski engages in a detailed study of the links between Liszt, his contemporaries, and his milieu. Drawing on Liszt’s famous Saint Stanislas Oratorio as a focal point, Puslowski brings together the history of the Romantic period in classical music and the intersection of key figures and historical events in his story of Liszt’s achievements told from a distinctly historicist perspective.

Readers get a new view of Liszt as Puslowski brings together a remarkable cast of characters. Friend and rival, Frederic Chopin, stands tall as a symbol of Poland’s fight for independence; the remarkable French “people’s poet” Pierre Beranger makes his entrance; virtuoso violinist Niccolo Paganini takes center stage later in Liszt’s life; the indefatigable French composer Hector Berlioz and the domineering Richard Wagner assume their roles in this musical drama; and finally two of Poland’s premier violinists, Karol Lipinski and Henryk Wieniawski, stand side by side with Russian pianist Anton Rubinstein, as the story of Liszt’s influence reaches across national boundaries and time itself to make its presence felt.