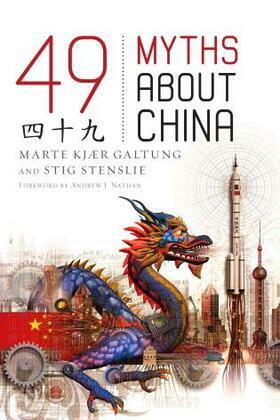 Communism is dead in China. “China Inc.” is buying up the world. China has the United States over a barrel. The Chinese are just copycats. China is an environmental baddie, China is colonizing Africa. Mao was a monster. The end of the Communist regime is near. The 21st century belongs to China. Or does it? Marte Kjær Galtung and Stig Stenslie highlight 49 prevalent myths about China’s past, present, and future and weigh their truth or fiction. Leading an enlightening and entertaining tour, the authors debunk widespread “knowledge” about Chinese culture, society, politics, and economy. In some cases, Chinese themselves encourage mistaken impressions. But many of these myths are really about how we Westerners see ourselves, inasmuch as China or the Chinese people are depicted as what we are not. Western perceptions of the empire in the East have for centuries oscillated between sinophilia and sinophobia, influenced by historical changes in the West as much as by events in China. This timely and provocative book offers an engaging and compelling window on a rising power we often misunderstand.