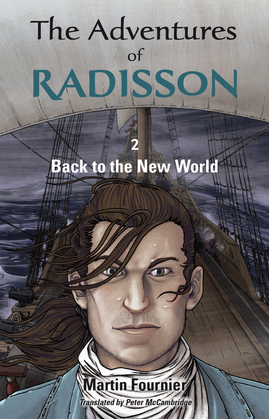 The Adventures of Radisson 2, Back to the New World

by Martin Fournier (Author), Peter McCambridge (Translator)
Excerpt Buy for $12.99
Fiction Action & adventure Historical
warning_amber
One or more licenses for this book have been acquired by your organisation details

fter spending two years with his new Iroquois family as described in Volume 1, Pierre-Esprit Radisson escapes and sails across the Atlantic to Holland before boarding ship to head down the west coast of France. Using his wits and the skills picked up in the New World, he makes his way up the Loire and arrives in Paris hoping to find his mother. But war for the succession of the king of France has razed the faubourg where he had lived with his family. What has happened to his mother?

Obsessed with returning to New France and the way of life he now loves, Radisson agrees to sign on with the Jesuits who are intent on evangelizing the New World. His return to the St. Lawrence Valley also means assuming responsibility for his past?his capture by the Iroquois and the death of his friends?but also honouring his commitment to the Jesuits and living a less adventurous life? at least temporarily.

But the New World is rife with challenge and conflict as cultures and economies collide. His mastery of the Mohawk language and knowledge of Mohawk culture make him a much-needed strategist and diplomat as plans are hatched to establish a new mission in the heart of Iroquois territory, which until recently was home to New France?s mortal enemy.